And despite enduring perhaps its most uncertain year due to the coronavirus pandemic, the consortium of 28 colleges and universities from Kern to San Joaquin County has persevered, providing a support mechanism for the valley’s institution presidents and chancellors.

The occasion symbolizes the consortium’s strength and value of speaking in a single voice for the benefit of Central Valley students.

The concept of a Central Valley collaboration was first envisioned by Fresno State President-Emeritus John D. Welty in the late 1990s.

In 2000, funding was secured with a $110,000 grant from The James Irvine Foundation so the consortium could develop a comprehensive action plan to increase the number of Valley high school students entering college as well as community college students transferring to four-year schools. In 2001, the Consortium was awarded a two-year $850,000 grant also by The James Irvine Foundation.  Incorporation papers were approved Aug. 5, 2002.

“The notion of a collaborative intersegmental higher education organization with an active board of directors composed of member institutions’ presidents and chancellors was unthought of at the time,” said Duran who bestowed president-emeritus of Merced Community College in 2012 and was brought out of retirement to lead CVHEC in 2016.

“Under President Welty’s leadership, the consortium developed into an organization made up of equals where the president of a small 3,000 student community college holds the same stature and respect as that of a president or chancellor of a large 29,000 student university,” Duran said.  “This unique culture allows regional leaders to speak with a single voice about higher education issues and challenges facing the nine-county region of CVHEC.”

Welty recalls both the frustration that led to the formation of the novel idea and the satisfaction of seeing the fruits of like-minded higher ed leaders from San Joaquin to Kern County embracing the concept.

“In the late 1990’s it was clear that the California Master Plan for Higher Education was not serving Central California very well,” Dr. Welty said in a recent interview for the 18th anniversary milestone. “College-going rates were among the lowest in the state. There was a lack of professional programs which was leading to shortages in health care professionals along with several other areas.”

In its first 15 years, CVHEC’s focus was to bring together postsecondary institutions to improve the college-going rate especially for underserved students and to make transfer among institutions easier.

“The task was not easy because there was not a culture of collaboration at the time,” Welty said. “CVHEC made it possible for institutions to begin cooperating and to seek solutions to issues surrounding the college going rates along with other critical issues facing post-secondary institutions.”

Today, CVHEC has become a higher education organization well-respected nationally and throughout California as it works to equitably increase certificate and degree attainment rates with its success supported by the College Futures Foundation in California and The Lumina Foundation nationally. The Consortium also has partnered with advocacy and policy groups like the Charles A. Dana Center at the University of Texas, Austin, Complete College America, California Acceleration Project and the California Community Colleges Chancellor’s Office.

“The consortium has become known for assisting Central Valley colleges and universities to become state leaders in the implementation of legislation and executive orders leading to the elimination of developmental courses in English and mathematics while implementing co-requisite support courses that changed the lives of many students for the best,” Duran said.

“Now, in the midst of this historic pandemic, a new powerful role is emerging for the consortium: providing an ongoing dialogue between member institutions to face the challenges of converting to a virtual platform for the delivery of instruction and student services,” said Dr. Stu Van Horn, West Hills Community College District chancellor and current CVHEC Board of Directors president.

“As CVHEC enters its 18th year in the Central Valley, students and communities in the region will continue to benefit from the work of the consortium and its board of directors,” he said.

“It has been very gratifying to see the progress that has been made in postsecondary institutions during the past eighteen years,” said the former president who retired in 2013 following a 20-year tenure as Fresno State’s 7th president. Welty oversaw his institution’s centennial celebration the year before.

“In addition to additional community colleges, UC Merced was founded and the California Health Sciences University has launched a medical school,” Welty added. “Congratulations to all of the post-secondary leaders in Central California who have demonstrated that collaboration among all sectors can make a difference.” 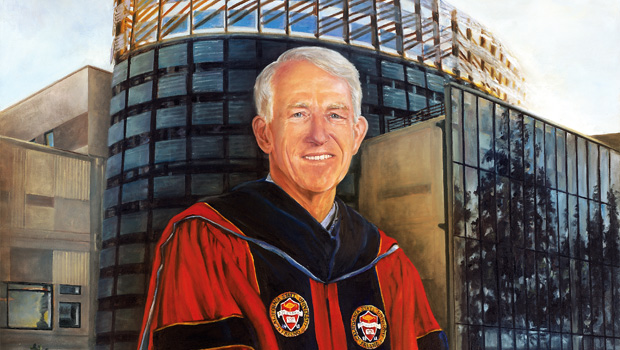 Dr.  John D. Welty, Fresno State President-Emeritus who founded and steered CVHEC to incorporation on Aug. 5, 2002, was presented a painted portrait upon his retirement in 2013.  The portrait, which hangs in the Henry Madden Library on campus alongside paintings of the university’s past presidents, was created by artist Joel Beery, a Fresno State graphic designer and alumnus.